Notes: Although this statue is not officially part of the Cold Cast statues, some often refer to this statue as one of the Cold Cast due to its incredible detail! Vivi is holding a frame with a phone card of the eight main characters (which can be removed from the frame) in the middle of the phone card it says, ‘All is according to the crystal (Final Fantasy IX logo) ………….crystal again’ 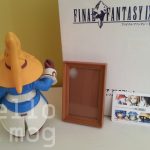