Notes: This is a fan book filled with details and images from KO Century Beast Warriors; there’s also information about merchandise that was available for the series. There are 10 coloured pages in total. I am unsure of its distribution, I picked it up at a convention for only a few pounds – the series is one of my favourites 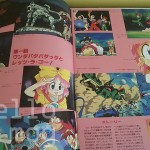